The Olu of Ilaro and ruler of Yewaland in Ogun state, Oba Kehinde Olugbenle has expressed that his people are ready to defend themselves against armed herders in the area.

In a statement on Saturday, the monarch accused armed herders of being responsible for killings and other criminal activities in the area.

The monarch condemned the killings by armed herdsmen in Yewa land in a statement on Saturday titled, ‘Stopping the time bomb before it is too late,’ addressed to President Muhammadu Buhari and Governor Dapo Abiodun.

The monarch warned that the people might resort to self-defense if the governments failed to be proactive.

“The attention of the President and Commander-in-Chief of the Armed Forces of the Federal Republic of Nigeria, His Excellency President Muhammadu Buhari GCFR and all the security agencies is drawn to the continued siege of the entire Yewaland of Ogun state in the last few weeks by armed herdsmen and bandits callously killing, including literally slaughtering, and maiming our people,” the monarch said.

“The criminal and dangerous activities of these herdsmen have so far happened in Egua, Oja-Odan, Igan Alade, Gbokoto and Ijoun, Owode-Ketu, Ebute Igbooro, Imeko Afon, and other places with reports of plans to attack major towns in Yewa land.

“The federal government and the Ogun state government are hereby implored as a matter of extreme urgency to act fast to secure the lives and properties of our people before it spirals out of complete control.

“In this situation, it is not out of place that people may resort to self-help to defend themselves if the government fails to guarantee their safety as citizens of Nigeria in the face of renewed insurgency by these criminals terrorizing our people with arms and dangerous weapons.

“I am issuing this press release as the paramount ruler of the region and in close consultation with the entire Yewa traditional council, and my people in the high hope that government at both state and federal levels, together with the security agencies, would live up to the expectation of their responsibility, as enshrined in the Nigerian constitution, to ensure the security of our lives and properties in Yewaland. A stitch in time saves nine.” 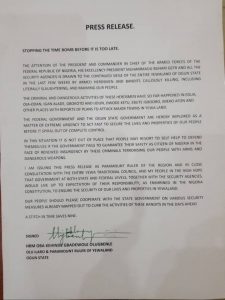